Big Day for Monarchs at the World Series of Birding

Michael O'Brien provided this description of the Monarchists' efforts in the 2017 World Series of Birding.  The efforts of the Monarchists provides well over half the annual funding for the Cape May Monarch Monitoring Project; we are most grateful for all support!

On May 6, 2017, the CMBO Monarchists participated in their eighth consecutive World Series of Birding, our annual fundraiser for the Monarch Monitoring Project. Once again, we competed in the no “Carbon Footprint” category, which means no motorized vehicles were used. So, for twenty-four hours (well, actually more like twenty hours) we bicycled and walked around Cape Island, trying to find as many species as possible to maximize our “dollars per bird” raised for the MMP. Due to some scheduling conflicts, the Monarchists fielded a slightly smaller team in 2017 than in past years, including team captain Louise Zemaitis along with Meg Walker Hedeen and Michael O’Brien.

Our day began promptly at midnight with a search for owls in West Cape May. It was a pleasantly balmy night with overcast skies, but a stiff breeze out of the Southeast meant less than ideal listening conditions for owls. That wind direction also meant very little chance for nocturnal migrants, which would more likely drift our way on westerly or southwesterly winds. But we got lucky right away with a begging juvenile Great Horned Owl – lucky for us, baby birds are always hungry now matter how windy it is! Shortly thereafter, we accidentally flushed a roosting Wild Turkey, which was a mutually startling experience, and turned out to be our only turkey of the day. Excited by a good start, we trudged along searching for nocturnal birds. With much persistence, we eventually conjured up an Eastern Screech-Owl, heard an American Woodcock “peenting”, heard squawks from Virginia Rail, and, as dawn approached, heard a Chuck-will’s-widow proclaiming it’s name. All in all it was a relatively successful night, considering less than ideal conditions.

As dawn broke, we stood on a bluff above Pond Creek Marsh, taking in many new species, with key additions including Clapper Rail, Common Nighthawk, Northern Flicker, and Seaside Sparrow. We quickly moved on to Cape May Point, where we scoured our favorite migrants spots. As predicted, the southeast winds overnight brought us very few new migrants but were perfect for ushering yesterday’s lingering migrants on their way northward. Our warbler list was lean. But our spirits rose abruptly when we got to our morning sea watching spot and were met by our awesome support staff, Lu Ann Daniels and Ron Rollet. Protein bars, ginger-cream scones, and café au lait awaited us on the Coral Avenue dune crossing, and we were re-energized! With sharpened eyes, the new birds came quickly: Brant, Black and Surf scoters, Common and Red-throated loons, Northern Gannet, Purple Sandpiper, Parasitic Jaeger, Royal Tern, and Black Skimmer. Sea watching was very good to us! Nearby Cape May Point State Park also yielded the long-staying Iceland Gull, as well as a noisy Northern Bobwhite. 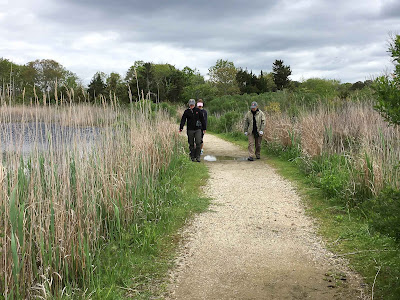 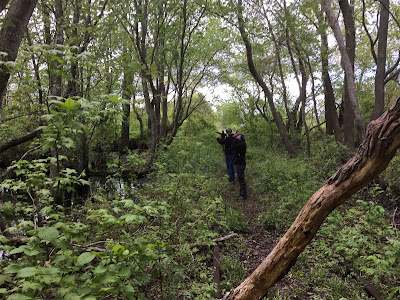 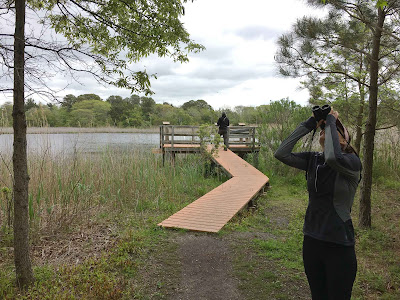 More digging for migrants around Cape May Point and Beach Plum Farm yielded only a handful of new birds. By noon, our tired legs were ready for more fuel, so we stopped at Louise and Michael’s house for lunch and sky watching. Once again, Ron and Lu took care of us with an amazing spread including turkey wraps, drinks, and other yummy snacks to keep us going for the rest of the day. With Northern Harrier, Cooper’s Hawk, and Downy Woodpecker added to our list, we headed back out, but this time with our good luck charm, Kashi Davis, running along with us to keep our spirits high! [Kashi would remain with us for a couple of hours, and Lu also joined us at a few locations during the afternoon.] A quick jaunt out to the Sunset Beach to look for a reported Great Cormorant turned out to be a poor use of time, but our first visit to the Cape May Migratory Bird Refuge (aka, “The Meadows”) more than made up for it! In short order, we found Green-winged Teal, and a long list of shorebirds including Stilt and White-rumped sandpipers, and Red-necked Phalarope! We also ran into a number of other teams, and paused for some brief socializing. 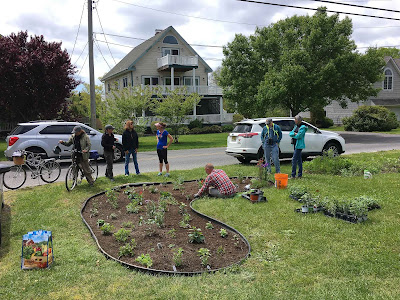 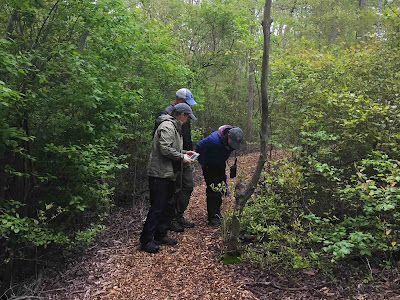 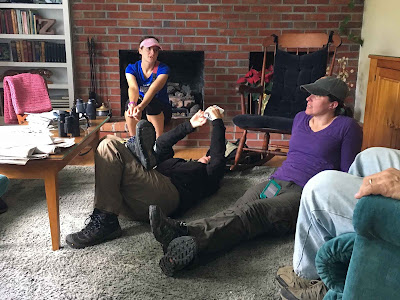 With our list starting to fill out nicely, we headed back into the woods to continue searching for songbird migrants. The Beanery produced its resident Prothonotary Warbler, and also a surprise Barred Owl hooting in the middle of the afternoon (after being silent during our nighttime visits). Migrants, however, were not in evidence. Ditto at other little woodlots we checked in West Cape May and along Bayshore Road. As we sat at the intersection of Bayshore and New England roads, poised to make a late afternoon check of Higbee Beach Wildlife Management Area, the utter lack of songbird migrants vs. good activity near the water made it an easy decision: we would skip Higbee and head back to the Meadows for a less rushed and hopefully more productive finish to the day. We’ll never know what we missed at Higbee, but the Meadows had more bounty to share with us. As we walked into the meadows, a Black-billed Cuckoo shot across the path in front of us. Then a Merlin zipped by. Then a Bank Swallow magically appeared among the local swallows hunting over the main pool (perhaps brought in by a late afternoon switch to westerly winds). Then a gull flock yielded Ring-billed and Lesser Black-backed. And then we finally found that Wilson’s Snipe that other teams had been seeing along the East Path. It was a strong finish to a day when migrants were very tough to come by. Although we didn’t win any awards, we were all pleased with our result of 127 species, and even more pleased with how much money we raised from all our generous supporters. Thank you all!

For those who also pledged for the butterfly species that we tallied, that number was 9, with these species seen: Tiger Swallowtail, Black Swallowtail, Cabbage White, Orange Sulphur, Spring Azure, Pearl Crescent, Common Buckeye, American Lady, and Silver-spotted Skipper. 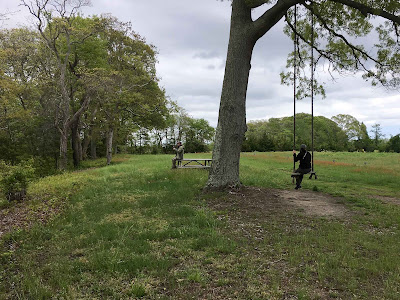 It's not too late to make your contribution!  Visit the Monarchists' page on the World Series of Birding, http://worldseriesofbirding.org/teampage.asp?fundid=1091#.WTC8V8bMyCc, if you'd like to chip in.  All contributions go to support the Cape May Monarch Monitoring Project, which conducts research and educational outreach programs relating to the migration of monarchs through Cape May.
Posted by Mark S. Garland at 9:19 PM