DON'T BRING MONARCHS TO CAPE MAY!

It seems like every autumn one or more monarch enthusiasts bring monarch butterflies from elsewhere to Cape May.  We just learned that this happened again yesterday.  While this is based on good intentions, we strongly discourage this.  It's bad for our research project, it's bad for conservation, and it is bad for the monarchs.  It gets us very upset.  Let us explain.

1. Bad for science: Our study began in 1990, and we have conducted systematic censuses of monarch butterflies in Cape May since 1992.  Bringing monarchs from elsewhere to Cape May leads us to count more monarchs than are naturally finding their way to Cape May.

2. Bad for conservation: If we end up with counts of monarchs that are artificially high because of monarchs brought from elsewhere, our data can be used to argue against the need to conserve monarch habitat locally and regionally.  We've made a lot of progress on monarch conservation here in New Jersey, don't sabotage our work!

3. Bad for the monarchs: There is evidence to suggest that monarchs migrating along the coast have a lower survival rate than monarchs migrating along inland routes.  The major water crossings, such as Delaware Bay and the Chesapeake Bay, are dangerous for monarchs, and we know that many perish in their attempts to cross over from Cape May to Delaware.  Monarchs from further north in New Jersey, and especially monarchs from Pennsylvania (where we understand yesterday's "delivery" originated), are likely to migrate on the west side of our big coastal bays, and more are likely to succeed in the migration.  Bringing them to Cape May takes them from a safer environment into a more dangerous one.  Plus, we don't know if they'll properly orient themselves toward Mexico if they've been driven a hundred or more miles by car. 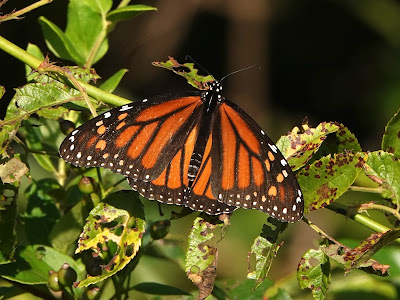 We ask all monarch enthusiasts to respect our nearly three decade study of monarchs and also trust that nature knows best -- a monarch should be given the chance to make its migration from the spot where its mother chose to lay her egg.  Please, please, do not transport monarchs from elsewhere to Cape May.