It was a pleasant day in Cape May, with very gentle winds, which mostly blew from the north.  Monarchs were migrating today, and hawk counter Tom Reed saw many gliding high overhead, probably riding the ideal, gentle winds right over the Bay to Delaware.  Census numbers were around 50 monarchs/hour for the third straight day.  It seems that as many monarchs were arriving into Cape May as were leaving, with many more just passing overhead and not detected on the census.  Most of the monarchs we were seeing were in excellent condition, a noticeable contrast to many of the worn and tattered ones that had been hanging around Cape May Point for several days. 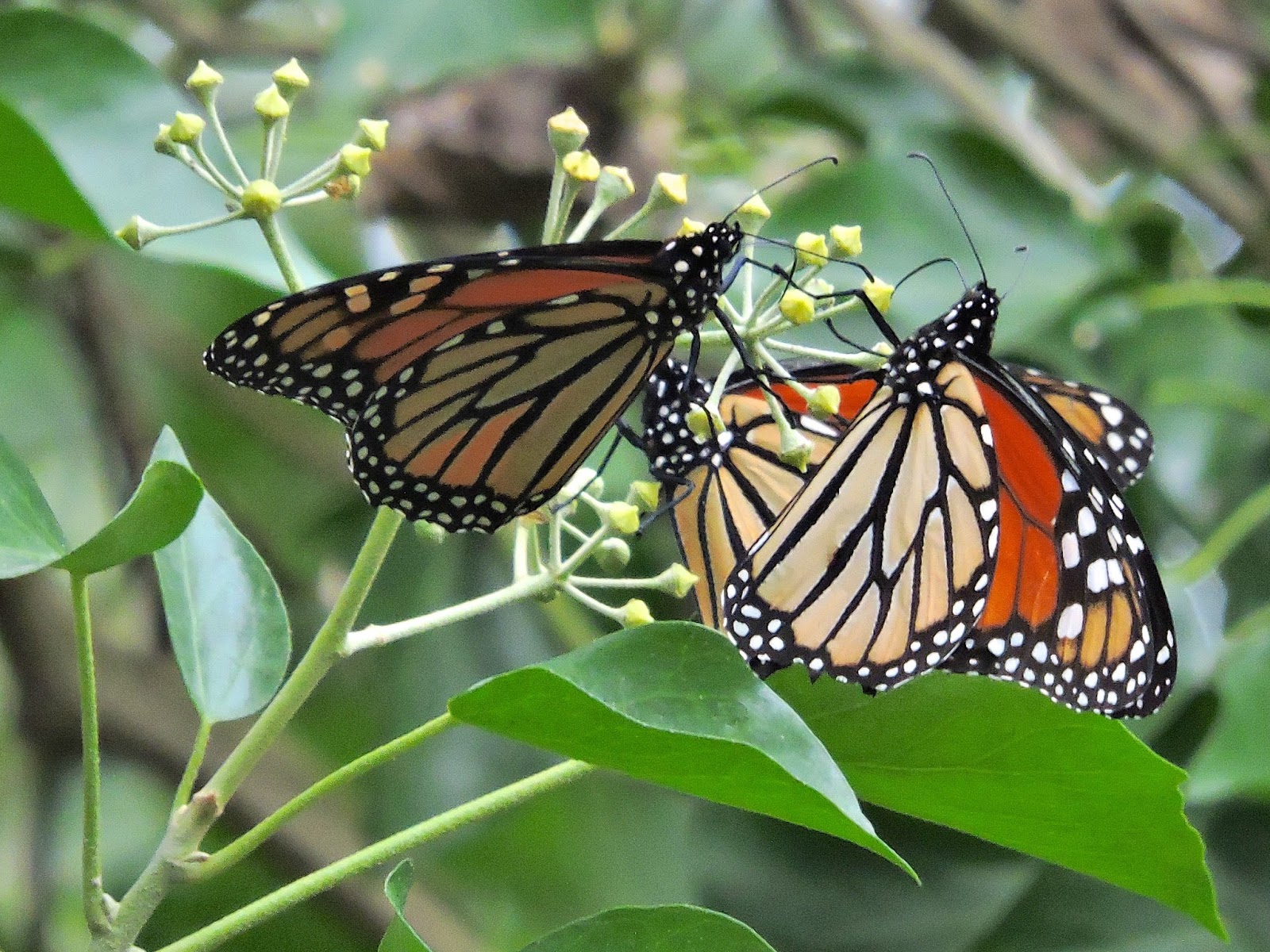 MMP volunteer Paige Cunningham found a small roost of monarchs in Cape May Point just before 5 pm, and other team members gathered to observe.  At first there were just 10 or 15 monarchs spread out in groups of 1, 2, or 3 in a small grove of trees.  But every few minutes we'd see another monarch or two arrive, and soon more than 30 were present.  As we left, we saw a few others heading into the same grove.  I'm thinking that we were seeing the last of the day's high flying monarchs, who sensed that there wasn't enough time left in the day to cross over to Delaware, and so they were descending into Cape May Point.  Here they were seeking out other monarchs to join in an overnight roost.  We couldn't stay until dark to see what the final number would be, nor did we find any other roosting areas, but we'll be out early tomorrow morning to see what we can discover. 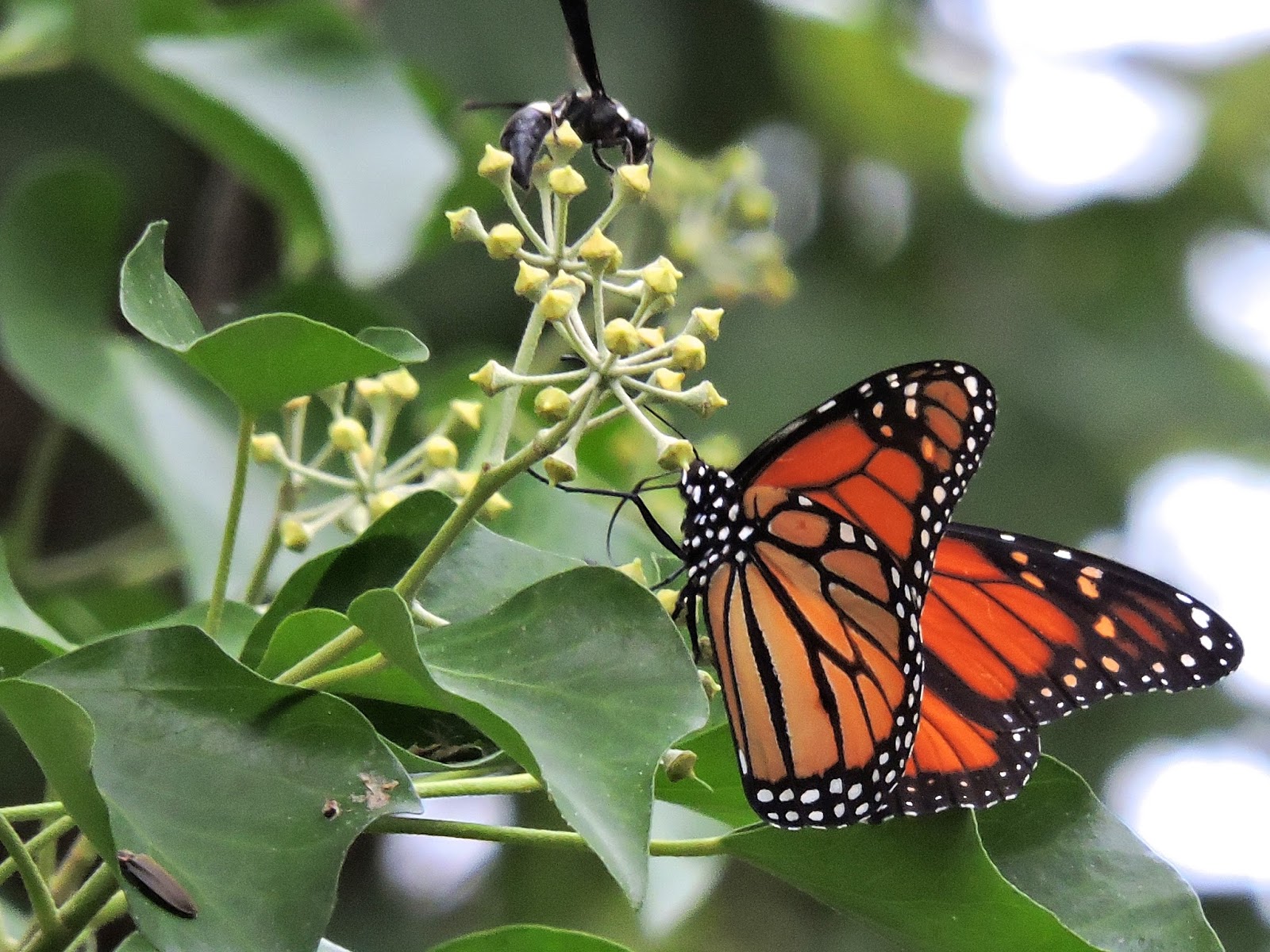 If I had to guess, I'd guess that we'll find a few more monarchs in this grove tomorrow morning, but I don't think it will be more than 50 or so.  I'll report back and let you know.  The forecast calls for another day of gentle winds tomorrow, starting in the north and swinging over to the east.  Those morning north winds could bring us more monarchs, the afternoon east winds probably won't.  But we never really know, which is why we're out there every day, counting monarchs, tagging monarchs, and trying to explain just what's happening with this year's migration.  We wonder about this every day, and we test our theories every time the wind changes direction.

Looking ahead, we see that south winds and warm temperatures are predicted for the weekend.  If this forecast holds, we're not likely to see much new migration until Monday, when northwest winds at 10 - 15 mph are predicted.  We're quick to point out, however, that forecasts often change.  If you're planning to come to Cape May this weekend, don't cancel your plans.  You're sure to see at least a few monarchs around the gardens of Cape May Point, and you can join us for a tagging demo at 2 pm either Saturday or Sunday.  Meet us at the East Shelter in Cape May Point State Park for this ½ hour to 1 hour program.  There's no charge, though we can accept contributions to the project from any who wish to donate.

We'll close with mention of another article about our project, this time from the Press of Atlantic City, which is due to run in tomorrow's paper.  The article, a video clip, and a nice gallery of photos may be found on the newspaper's website, at http://www.pressofatlanticcity.com/news/breaking/monarch-butterflies-passing-through-south-jersey-picking-up-tags-along/article_390da8ae-3f7e-11e4-aabc-7f1b4a547b00.html.  We've been in the news almost every day this week.  While that's nice for us, it's especially heartening for the monarchs, who need more humans to care about their fate and to take actions that will protect monarchs and the milkweed plants they depend on.