An important element of the Cape May Monarch Monitoring has always been the tagging of some of the monarch butterflies that migrate through Cape May.  Most of the monarchs we tag will never be relocated, but the few that are tell us a lot about the route and speed of migration.  Some biologists doubted that any monarch butterflies migrating along the Atlantic coast could make it to the overwintering areas in Michoacan, Mexico.  We've had several dozen tagged in Cape May found in Mexico, proving that at least some of our monarchs succeed in the great migratory journey. 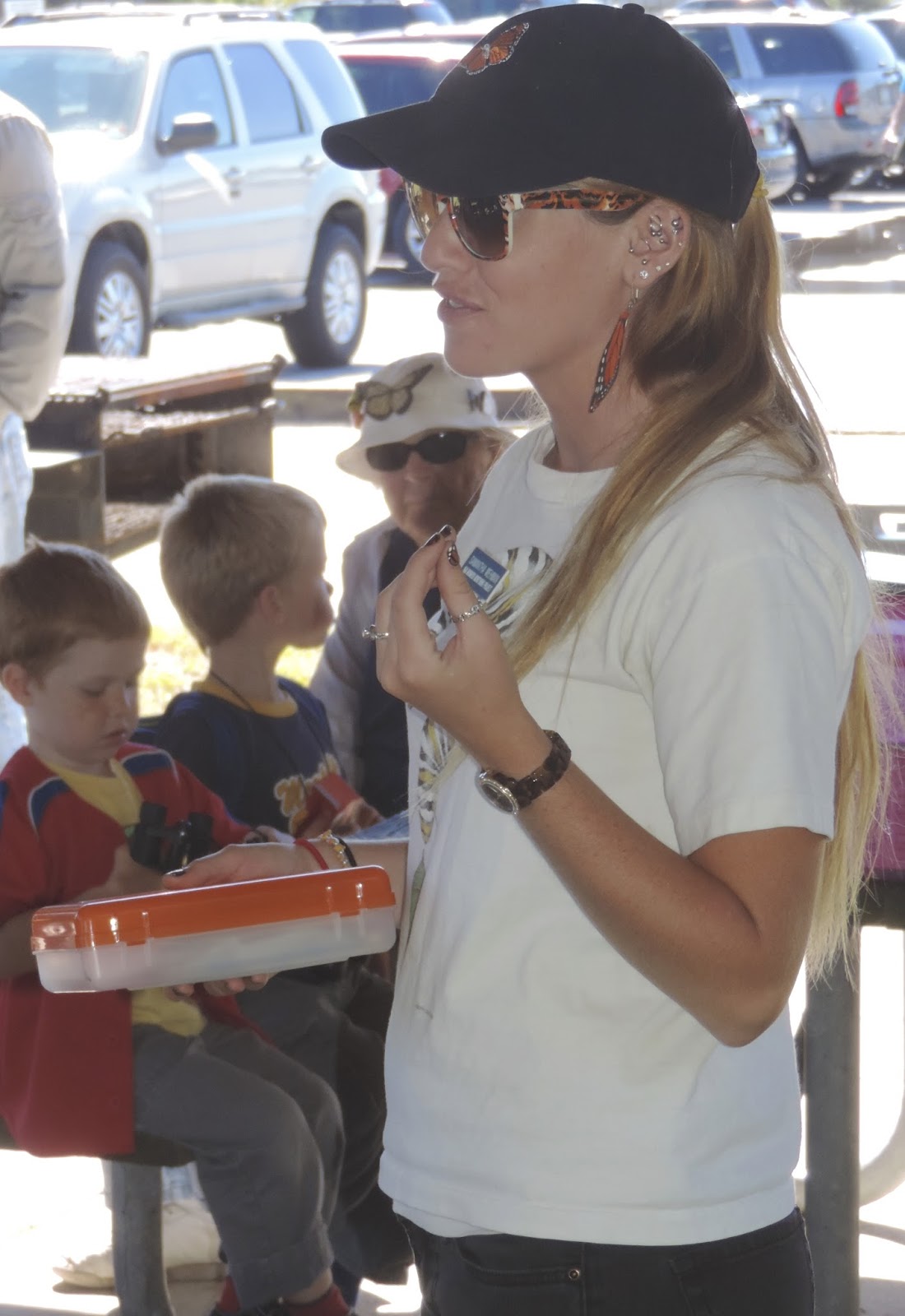 We're pleased to report that it's happened again!  We recently receive word that a monarch tagged by Samm Wehman Epstein (shown at right) was found in Mexico.  Samm, last year's seasonal worker, placed a tag coded SJN 079 on a female monarch in Cape May Point on September 26, 2013, and that tagged butterfly was found at Macheros on February 27, 2014.  Macheros is one of the southernmost known wintering areas for monarch butterflies within the Transvolcanic Mountain Range, located near the border between the states of Michoacan and Mexico, west of Mexico City.

Whenever I tag a monarch and watch it fly away, I feel like I'm sending out a message to the world, and hoping that message will be received.  It's like the old message in a bottle.  It's a rare and exciting experience to learn that one of the messages has been received.  In terms of science, every tag recovery we receive teaches us more about monarch migration. 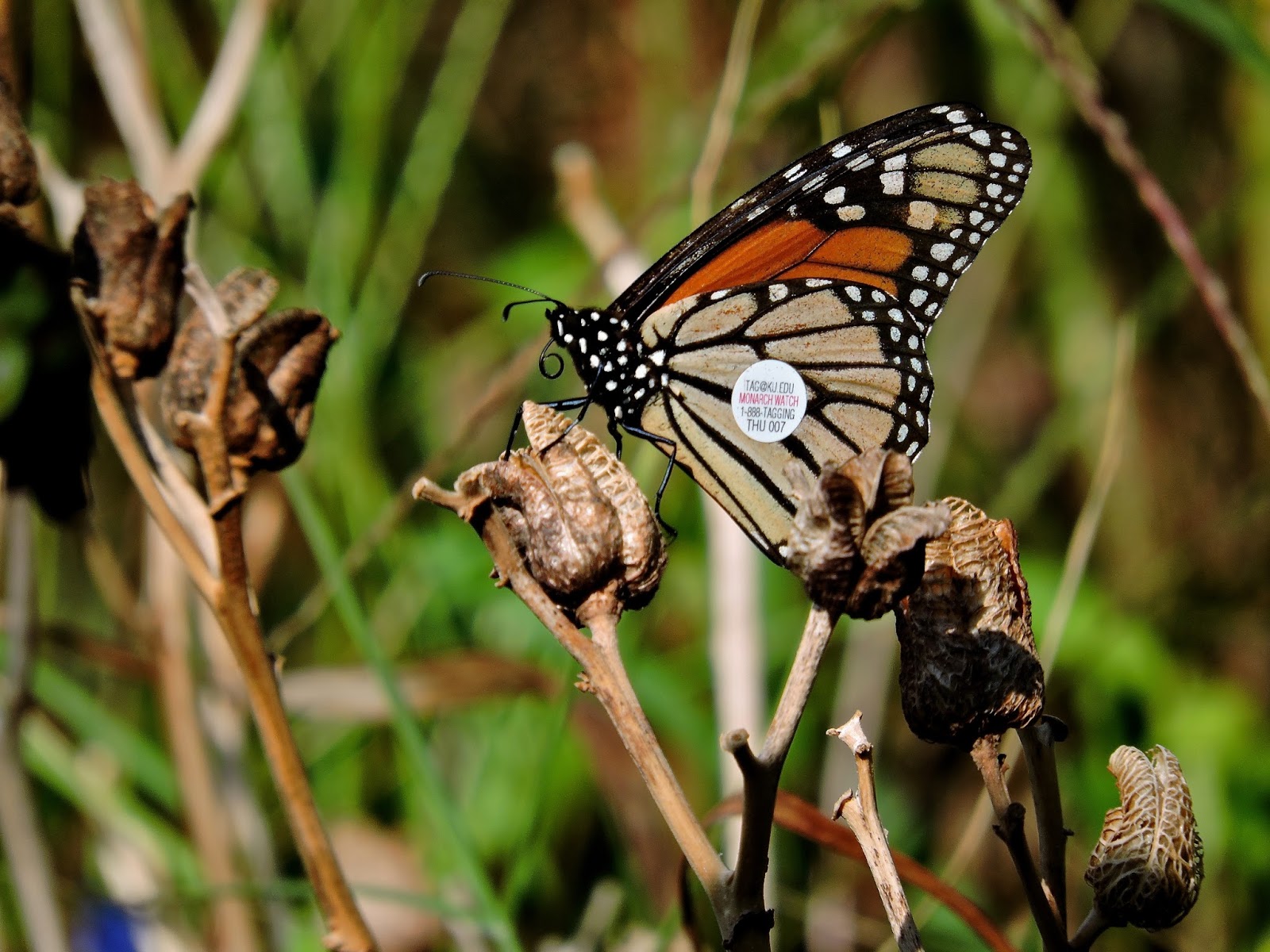 It's exciting to learn that one of our butterflies was found in Mexico, but it's equally exciting whenever we learn that one has been found someplace along the way.  Since no one is allowed into the monarch overwintering sites for the first few weeks after the monarch arrives, we still don't know how quickly a monarch can travel from here to there.  But tagged monarchs found along the migratory route can tell us something about the speed of migration.  Tag recoveries have shown us that a monarch is capable of traveling 200 miles in a day. 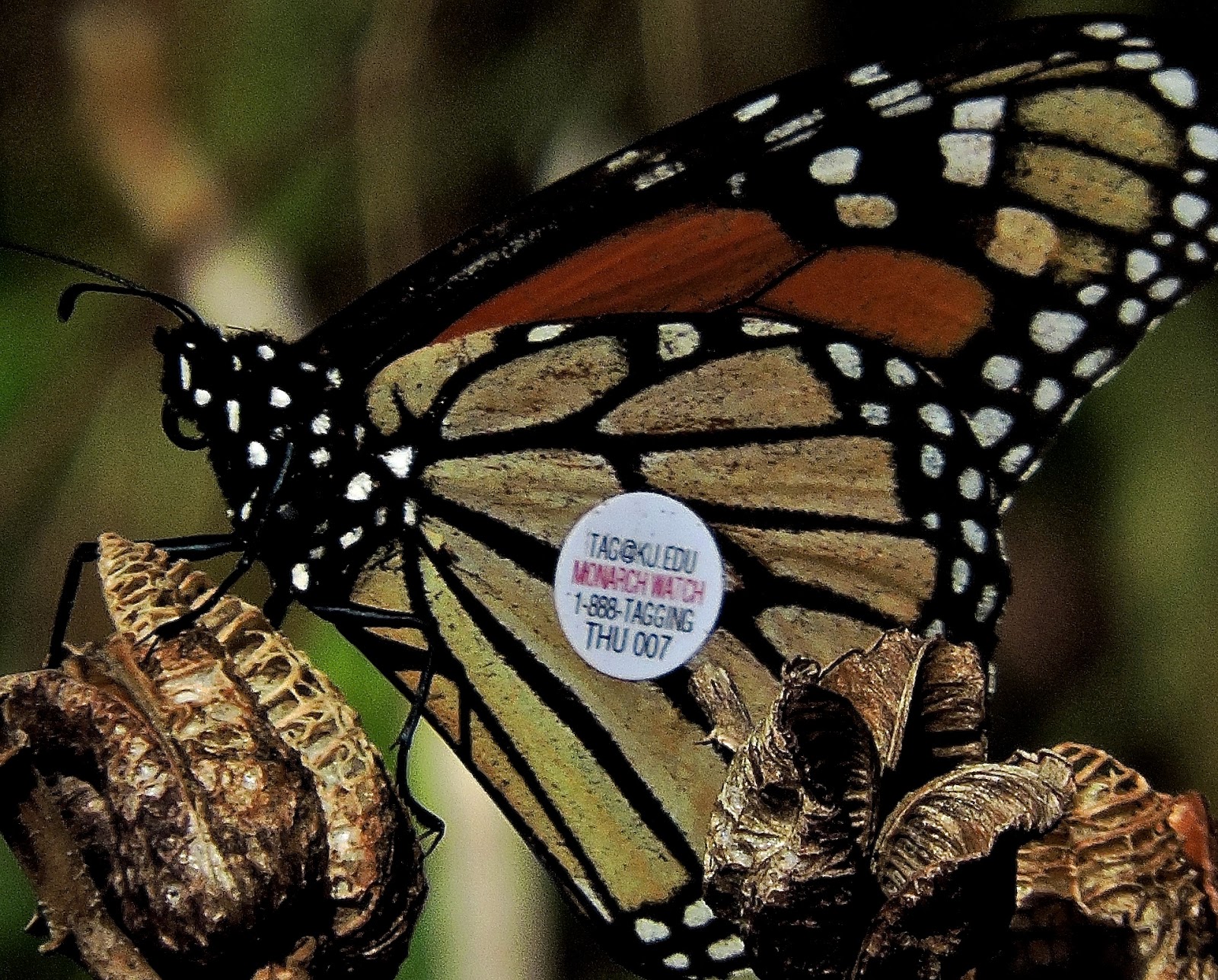 You can help add to our understanding of monarch migration by watching for tagged monarchs.  You don't need to recapture a tagged monarch to get the data, a decent digital photograph can often do the trick.  You might have work on a computer to enlarge the image, increase the contrast, and darken the image in order to read the information on the tag.  That's what I did with the photo at right.  Each of our tags has four lines.  The first has an e-mail address: TAG@KU.EDU.  Next, in red letters, is the name of the project that coordinates the tagging: MONARCH WATCH.  The third line provides a toll-free phone number: 1-888-TAGGING.  The last line is most important, as it's the 3-letter, 3-number code that's never repeated.  If you found this monarch and could read the tag (either in life of on a photo), we hope you would report it by either sending an e-mail message or by calling the phone number.  Be sure to report the tag sequence (THU 007 in this example), the date, and the location where you saw the monarch. 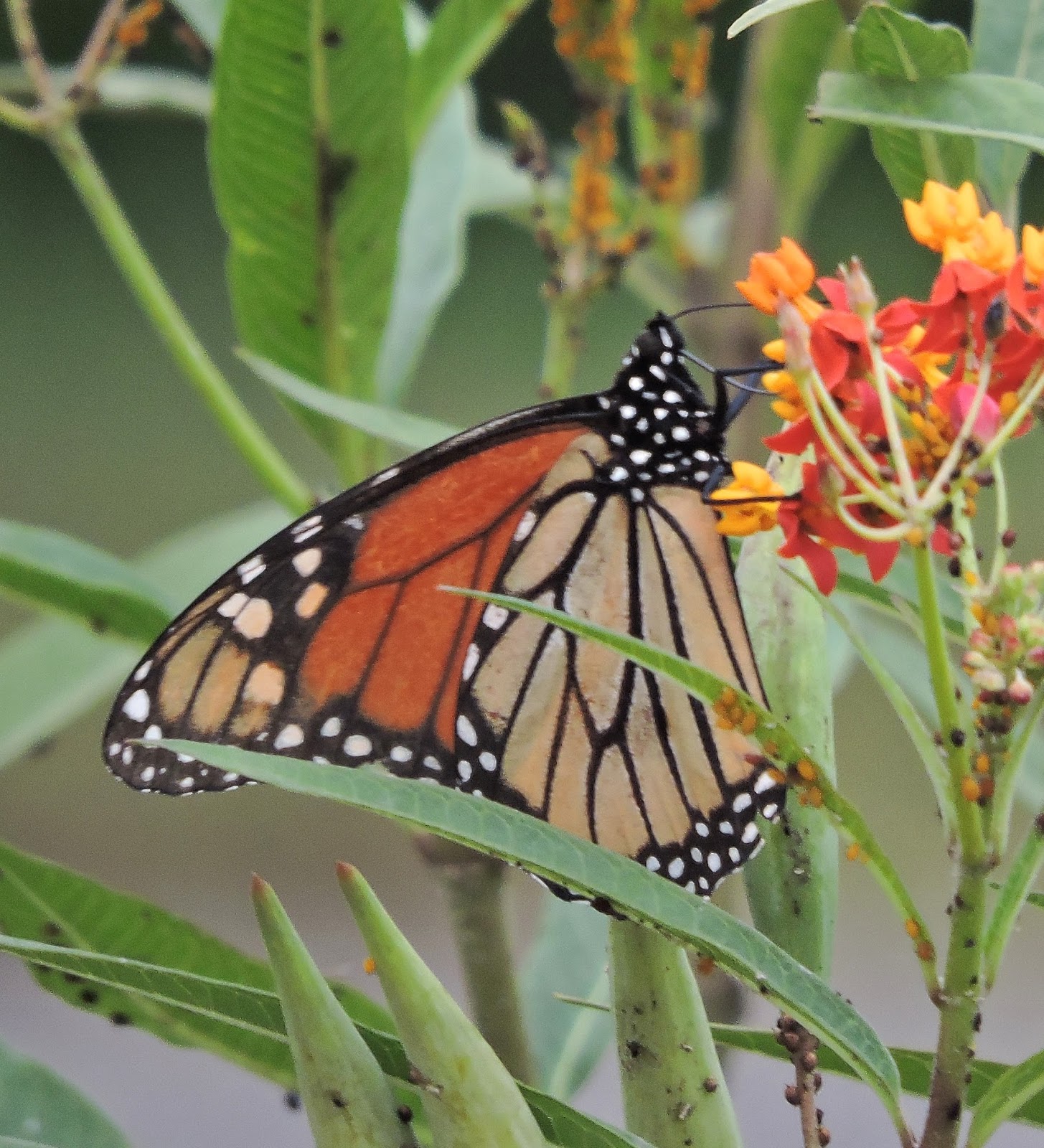 We're hoping to tag a few thousand monarchs in Cape May this autumn.  So far we are seeing more monarchs than last year, up from 6.95 monarchs/hour on the 2013 census first week to 16.0 this year.  Our census data are posted on our website each week, and you can see how our first week compares to all previous seasons here: MMP Data Page.  Numbers may be down for the next few days, as we're expecting a good bit of rain, but a cold front that's predicted to arrive late in the week could bring the season's first big push of monarchs into Cape May.  We never know for sure, but it is certain that our team will be out there watching, counting, and tagging monarchs.  And we promise to report back frequently with updates via this blog.
Posted by Mark S. Garland at 10:02 PM